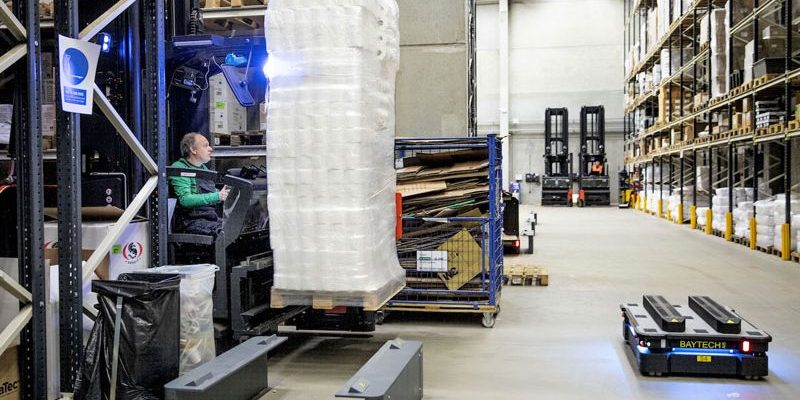 Use robots where it makes sense, and people to do higher-value tasks. That’s the philosophy behind the design of the entire logistics flow of wholesale company ICM. The company’s Odense high-rise warehouse operates with manned trucks that move along narrow aisles formed by racks that reach 12 m high, removing or placing pallets in position in the racks. MiR robots deliver pallets in a steady stream to the ends of the aisles. Experienced logistics personnel in the warehouse receiving area solve complex tasks, while ensuring the robots take care of the internal transport tasks. The automated pallet transport setup has saved 40 hours a week. Time that the personnel can now spend on more complex and higher-value activities.

The high-tech warehouse with its myriad of pallet transport operations running from 07:00-22:00, is located in Odense. Tonnes of goods arrive at the ICM logistics centre every year on a total of 31,000 pallets. The ICM staff manage 100,000 orders a year, most of these next-day deliveries. ICM is one of Scandinavia’s leading suppliers of personal protective and technical equipment and work environment solutions.

Space is limited. Customers are impatient. Competition is fierce. This means that time, personnel and space must be utilised optimally.

“Thanks to an investment in three mobile MiR1000 robots, three employees now save several hours each on daily activities. They no longer have to spend time manually moving pallets from a stacker to the aisles in the high-rise warehouse.” Instead, they can place the pallets on special MiR racks, from which the robots collect the pallets and transport them to the aisles inside the high-rise warehouse. The MiR robots leave the pallets at the end the aisles to be collected by high-reach trucks that place them in the relevant racks.

“The high-reach truck operators automatically report when they have taken a pallet from a rack, so I can just press a button on the tablet screen and send one more MiR robot on a mission. This way the robots ensure the high-reach trucks are always supplied with pallets”, says Jesper Lorenzen, Warehouse Assistant and responsible for goods reception at ICM A/S.

The high-reach truck operators use a map on a tablet in the truck to see at all times where the small robots are, and the mobile robots make themselves noticeable using audio signals and lights in the busiest areas. This means that there is a close collaboration between the trucks and the robots and in a company with constant internal traffic, communication between vehicles is vital to avoid different machines blocking each other’s path.

ICM has made a dedicated route for the mobile robots, freeing space for other traffic in the logistics centre. Previously, space was very cramped because of the many operations with manual stackers on the main traffic routes, which have now been replaced by the MiR robots. MiR’s fleet management software, MiR Fleet, also ensures that the tasks are distributed between the mobile robots, so that it is the robot that can carry out the task in the shortest time that is chosen, and it also ensures that the three mobile robots automatically move to a charging station and charge up between tasks, so that downtime is optimised.

Overall, the mobile robots have saved approximately 40 hours a week at ICM, time that the staff previously spent on internal transport, moving goods between the receiving area and the positioning areas. These employees can now focus on higher value activities, i.e. planning and optimisation: Assessing, handling and prioritising the pallets and the contents is a complicated task that requires insight and experience because many parameters must be taken into consideration. Therefore, these tasks must be solved by people.

“The robots have saved time, which we can now use to optimise the warehouse and fine-tune flow. We have become used to the new technology and have learned to work in a completely different way. The more we apply it, the more time we save through automation using mobile robots” says Jesper Lorenzen.

The mobile robots have not just increased efficiency at ICM. According to Brian Brandt, Warehouse Manager at ICM, they have also improved the working environment. He sees many positive perspectives on investing in technology that both increases capacity and job satisfaction.

“It’s just so much fun working with mobile robots. Being able to move something from A to B without even touching it, that’s really cool. The design of the MiR robots is so simple and user-friendly that I could take a new colleague in from off the street, and they would also think they’re logical to use,” says Brian Brandt and smiles as he observes a MiR1000 robot moving past, carrying a 600 kg load of cleaning cloths on a pallet.

IMPROVED WORK ENVIRONMENT THANKS TO AMRS

Søren Jepsen, Supply Chain Director at ICM A/S, explains that devising the optimal workflow for the entire flow of traffic and transport of goods in the logistics centre has been a learning process.

“Our warehouse uses the chaotic storage principle, managed by a warehouse management system. We must be geared to be able to drop everything in order to be able to deliver within 24 hours to our customers in Denmark. This means it’s about using our resources shrewdly. We’re investing in new technology in order to safeguard our staff and to attract new, talented people,” says Søren Jepsen.

At ICM, the management sees clear potential in automating more processes. Right now, it is the flow from the good receiving area to the storage aisles, but in the long term, ICM will also automate transport from picking to the delivery of goods and get even more benefit from the robots.

ICM A/S was established in 1946 and since then it has growth through organic growth and the acquisition of companies related to safety and hygiene. It has an annual turnover of approximately DKK 400 million. 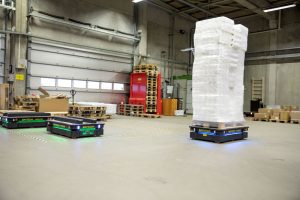 Via Sergio Bresciani, 7 – 25124 Brescia (BS) Italy Telephone: +39.030.3582154 – Fax: +39.030.2659911
By clicking on "Accept all cookies", you accept the storage of first and third-party cookies on your device, including profiling, to improve navigation of the site, to detect site usage statistics, to obtain information about our advertising campaigns, to show you advertisements, including on third-party websites via remarketing, in line with your preferences. You can decide to allow the reception of all cookies or only some categories of them.
Cookies policy has been updated since your last consent. Check the preferences you have already expressed about the categories of cookies you want to allow installation.